Fälschlich auch als Bd. 18 der Schriftenreihe bezeichnet. his essay proposes that Hume’s non-substantialist bundle account of minds is basically correct. The concept of a person is not a metaphysical notion but a forensic one, that of a being who enters into the moral and normative relations of civil society. A person is a bundle but it is also a structured bundle. Hume’s metaphysics of relations is argued must be replaced by a more adequate one such as that of Russell, but beyond that Hume’s account is essentially correct. In particular it is argued that it is one’s character that constitutes one’s identity; and that sympathy and the passions of pride and humility are central in forming and maintaining one’s character and one’s identity as a person. But also central is one’s body: a person is an embodied consciousness: the notion that one’s body is essential to one’s identity is defended at length. Various concepts of mind and consciousness are examined – for example, neutral monism and intentionality – and also the concept of privacy and our inferences to other minds. 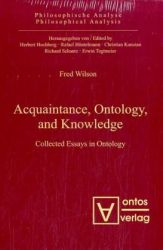