With contributions by Alessandra Giumlia-Mair and photographs by Thanos Kartsoglou.

Preserved intact, the gold bust of Emperor Septimius Severus from northern Greece is an outstanding example of Roman Imperial portrait art. It is one of just six emperors’ likenesses in gold that are known from Antiquity.

Together with the famous gold bust of Emperor Marcus Aurelius from Avenches, it is probably the most important example of an artistic genre that must have been much more prevalent in Antiquity and that, in a manner of speaking, acted as a portable substitute for the emperor at religious ceremonies, in the army or present at official acts.

The bust was discovered by chance in 1965. This makes it all the more remarkable that it has remained almost completely unpublished until now. Much credit is due to Dr. Anne de Pury-Gysel for securing permission from the Greek General Directorate of Antiquities to study the original gold bust and publish a monograph devoted to it. It also highlights the scientific renown she has attained thanks to her vast research experience. 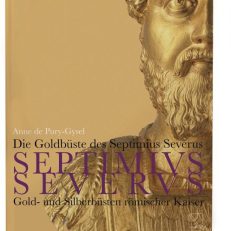